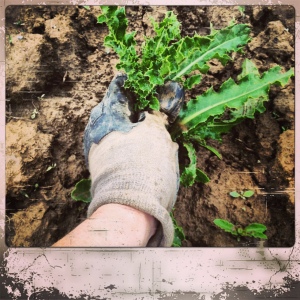 I am a thistle killer. Believe it or not this is one of my favorite activities at 9 Miles East Farm. Pulling these bad, bad plants is not easy. It is thorny business. However, the internal rewards are great, and I experience a feeling of supreme satisfaction with this task. At first I thought it appealed to the drop of OCD within. (I sure like neatness.) But upon further consideration, I realized that the task of weeding out thistles has something that a lot of other jobs in my life have lacked–purposefulness.

The simple act of ridding the soil of a harsh and invasive grower-of-thorns is an investment in the future. When extricating the weed from the soil, it is impossible to get the entire root. However, we weaken the structure and the next time he pops his stubborn head through the ground it is with less vigor. The farm-owner assures us that eventually, “we win.” The soil is better. The foot print of the gardens can expand, and we  will grow more food.

The idea of purposefulness ties nicely into an other idea to which I have been exploring. Purposefulness in the consumption of alcohol, specifically wine. A wonderful co-worker, Jillian, and I share a passion for food, farms and service. We often converse about Thomas Keller and different recipes that we have tried from his cookbooks or something we would like to attempt. Last week, Jillian brought me Service Included: Four-Star Secrets of an Eavesdropping Waiter by Phoebe Damrosch. This book explores the world of Per Se and the author’s relationship with Head Sommelier, André Mack. As warned by my co-worker, I became very anti-social for a few days, staying up late and devouring the book.