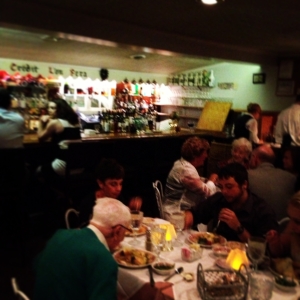 Saturday night was a lot of fun. We joined up with my Auntie and Uncle Bob for dinner at one of our favorite restaurants, Chez Pierre. This place is really one of a kind. It has been in business for many decades and has always been owned by the same family. You can count on seeing the same hostess (the owner), waitstaff, piano music and menu every time you step foot in the place. Normally, I like variation in a menu but I love the predicability of this special place.

In anticipation of dining out that night, I ran through the food choices in my mind and thought of all of the items that I love and would most likely order. This place is classically French in a very non-pretentious way. I would have to skip the martini and this felt disappointing. I LOVE ordering a martini straight up with olives to complement the paté that is brought to the table upon receiving your cocktail. Moving on, I thought about the clams casino that I would share with my Uncle and how he always orders the frog’s legs. I imagined that I might get the filet mignon with béarnaise sauce with the scalloped house potatoes. Oh joy! I just love the whole predictability of what will be offered and the homey feeling that comes along with the dining experience. And dessert…oh yes, dessert. I always, always, always order the creme de menthe parfait. That vanilla ice cream and fresh whipped cream drizzled in minty goodness with a cherry on top. Oh wait…screeeeeech. That ain’t gonna fly. There is alcohol in cream de menthe. Scratch that idea. Well, I guess that I will be skipping the martini AND my favorite dessert as well.

Our party of four arrived and met up with my Aunt and Uncle’s friends, Bob and Joan. It is always a lot of fun to go out with this crew. I have never had parents who enjoy socializing and my Aunt and her friends have adopted Philip and me in a warm and welcoming way. I feel greatly blessed being embraced by this cohort. For this evening, I was placed between the two Bobs, Uncle Bob and Bob the Friend.

The dining experience tonight was even more fun than usually. It is thoroughbred racing season in Saratoga Springs which brings out many horse owners, fans and tourists. I have been living in this town for almost 30 years and have seen the track season extended from an exclusive 28 days to 45 days. This may not seem significant but the feeling of the racing meet (in my opinion, of course) changed with the expansion of the calendar. It somehow feels less special, slightly “cheap” and tacky with this change. I was working in a restaurant at the time of this decision was implemented, and I witnessed a transformation in the customer base as more people had the opportunity to travel to the races. What transpired was an elevation in drunkenness, rudeness, violence and crime. That is not to say that Saratoga is an unsafe place to visit, but the negative changes that I witnessed was enough to drive me to the country for work at a different establishment.

On this particular Saturday, as we enjoyed the feeling of being a part of this scene as we witnessed one group after another enter the restaurant being greeted in a familiar way and embraced by the owner. This was “old home week.” The perennial customers were returning and….they were coming back in a civilized manner for their favorite familiar dining experience dressed in navy blazers, ties, modest floral dress and strappy sandals. The old Saratoga was back and I was witnessing it. Hooray!

As predicted in my mind earlier that day, we ordered our favorites; clams casino, frogs’ legs, paté, beef with béarnaise sauce. When it came time to order dessert, the old faith parfait was (of course) still on the menu. Nothing else measures up to the parfait for me so when I announced that I couldn’t partake of the dessert, a friendly debate ensued.

Uncle Bob, on my right, chimed in first, “It’s a parfait, not a cocktail. You have to order it!” Bob the Friend, on my left stated, “My aunt never drank a drop of alcohol but she would order a parfait.You can’t count it as a drink.” Uncle Bob added that the same was true of his mother. She never drank but always enjoyed a parfait. The whole table was nodding in agreement. It seems I was the only one worried about this being a violation of my abstinence from alcohol. I was feeling a little nervous because I couldn’t exactly recall how much booze was in this concoction–it had been a while since I order the thing. The last straw was the unsolicited opinion of my husband who added, “If it were my dry year, I would order the damn dessert.” (I love when Philip has a drink or two and throws caution to the wind.) 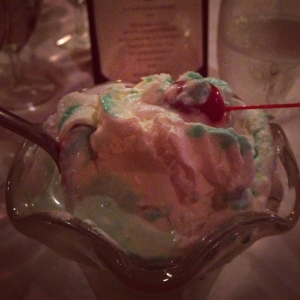 In the end, I was swayed by the consensus at the table that ordering the parfait did not violate the contract that I have with myself. When the tower of icecream arrived, I was thrilled to see that there was not more than a tablespoon of liquor drizzled over the whole thing. All in all, it was a very good decision. The minty-fresh, medicinal flavor mixed with the vanilla was just what I had remembered! Assuring everyone that I could still drive home (everyone’s a comic), I left feeling very satisfied.

4 thoughts on “The Great Parfait Debate”