I hit the 9 month mark on September 1 and with that, I felt that a new blog entry was needed. I have been asking myself what I have learned of late. Over the course of this year, I have talked at length about the psychological and emotional aspects of taking time off from drinking and at this point, the physical component is worth exploring. I have refrained from making correlations between the lack of chardonnay pumping in my veins and any changes that have occurred with my physical body. The reason for this is that the body has momentum, and it takes awhile for changes to manifest after long periods of doing something a certain way. I wanted to give myself a long period of adjustment before jumping to conclusions on this topic.

I made some assumptions coming into this experiment:

Before I stopped drinking, I blamed all physical issues on alcohol. This mental game added a layer of guilt and unhappiness to every glass of wine or vodka martini. I would tell myself, “If I just stopped this nightly drink, _______ would go away.” I don’t suffer from serious physical illnesses but I hoped that the seasonal allergies and digestive issues that I have dealt with for years would just disappear. Well, it just isn’t so. I can report with confidence that giving up a drink or two per day does not have a significant affect on these maladies. Surprisingly, I have seen little if any changes in the cyclical nature or the intensity of these physical issues.

As for the prediction that my overall well-being would benefit from a change in alcohol habits, that also has proven to be false. My doctor has examined, poked, prodded, weighed and measured me. Adding to this thorough investigation, I surrendered multiple test tubes of blood (this year and last) to find out that not a single statistic has changed in the last 12 months. I really don’t mean to complain because my overall physical health is pretty darn good. I just thought it would have gotten even BETTER with all of the sacrifices that I have made in the last 12 months.

The topper of course for any woman my age is the weigh issue. I predicted that I could immediately shed some pounds by giving up my daily indulgence of wine or martini. When I first stopped I noticed a change in my face, a little thinner. But after an initial 1-2 pounds, nothing happened. I continued to work at my desk job and stay diligent about running 3-4 nights a week. Philip even bought me a Nike Fuel Band so I could track my activity level. Nothing. For 7 months, not another pound was shed.

Then something life-altering and wonderful happened. The supervisor at the farm left, and I was asked to work full time. This meant, being outside, active and physically tired at the end of the day. I stopped running because, my legs and feet were so tired whenI got home that I could not even imagine going for a run. The Nike Fuel Band indicated that I was doubling my activity level and caloric output every day at the farm. And…I started losing weight. (I have slimmed down by 6 pounds in 2 months.)

The change in lifestyle, working outside on a farm, has facilitated the biggest lesson for me thus far. It is not alcohol that caused me to gain weight over the last 9 years. It is a desk job…and the stress and frustration that came along with that type of job. Now, as part of my farm job, I deliver vegetables to office workers who sit in “cubes”, like I did. I can’t help but notice how many people are really overweight. I sympathize with their predicament. As hard as I tried to stay on top of the weight gain while working at a office, it just could not do it. The pounds crept up and my ass got wider no matter how many miles a week I was running after work.

The conclusion that I have come to in month 10 of this experiment is this–my body is not made for sitting. It is made for moving, lifting, crouching down, standing up and breathing in fresh air. And my ol’ friend Chardonnay no longer has to be the scapegoat for any misgivings I have about my physical condition. Looking forward, the wine collection in my cellar will be opened and consumed when this is all over (of this I am sure) and… if I resume the nightly ritual of pouring a drink or two with my husband at the end of the day, I will not plaster the sharing of the moment with guilt. Putting distance between myself and the act of drinking, has illuminated the benign nature of this habit. This is not true for all drinkers, but I know it is true for me. And for this I am grateful. 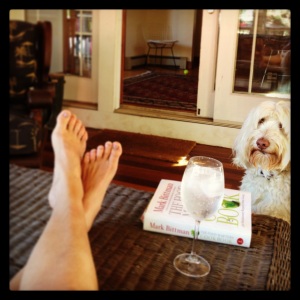 One thought on “Before and After”