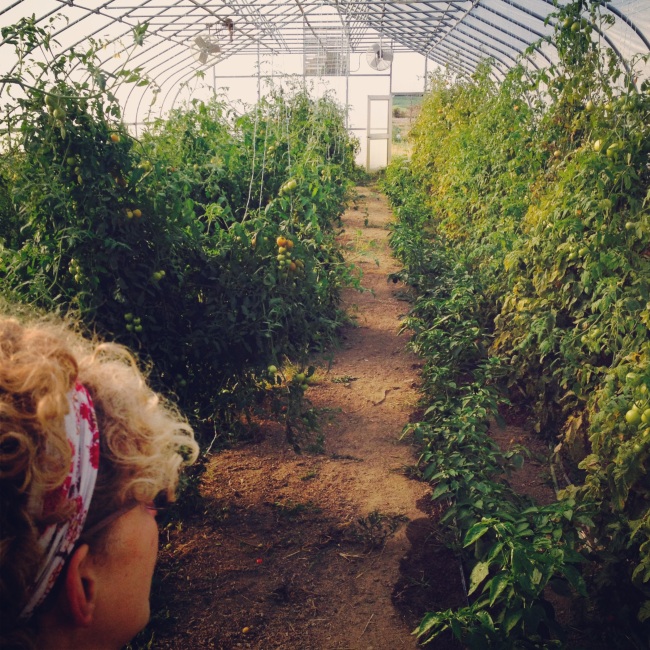 I spent Wednesday morning in the farm’s high tunnel, where the majority of the tomatoes left on the vines reside. The regional public radio station, WAMC, has been holding its fund drive. Lately listening to the familiar voices recite the mantra of persuasion over and over again has consumed hours of my working days.  Call now! We have to end this fund drive! We can do it if everyone calls now. Dispersed between the cajoling, the repeated shout-out of the number 1 800 323 9262.

I used to despise the fund drive on this station. However, commuting over the last 3 years, I have come to rely heavily on the WAMC news and programming and submitted to becoming a dedicated contributor. Feeling grateful for this station, the rhythms of the incessant, repeated call to action drove my work and created a canvas for my thoughts.

Picking tomatoes alone in a field or a green house can be boring work. It can take hours to reap the rewards and feeling of satisfaction at the end. On this day, I just let my mind wander to the sounds on the radio. What kept returning to this interaction between thought, tomato and radio was a nagging feeling that I was not going to enjoy the event that was scheduled at the end of the day—a leadership social hour. This feeling of dread was compounded in my solitude. What was this all about? Feelings of not wanting to see people, talk about my job, how my summer was, the kids emerged. Philip was traveling for work and I daydreamed of going home after work to write, hang with the dog, and eat chicken wings (my dirty little secret obsession).

This was the first time that I ever considered skipping one of these events. I love this organization and these people, right? Yet, I looked down at my hands stained with perma-dirt from harvesting and I couldn’t imagine blending with the regulars at the upcoming mixer. And my hair…it looked as if I was auditioning for a Phyllis Diller lookalike contest! Reminding myself that when upon arriving home I still clean up pretty well, I concluded that it must be something else that is different. I had to acknowledge that for the moment, I have lost the desire to attend social events. Happily, my days are spent observing the cycles of the farm and the beauty in and around these fields.

I continued to systematically plunk tomatoes into my yellow lug. The radio became distant white noise and words in my head started bubbling up, repeating, “You’ve changed. Hey, you’ve changed. You’ve really changed.” The words layered over the radio mantra felt dream-like and something wonderful was conveyed in that moment. I can only describe it as a deep connection to all other farmers growing food and those who spend their days as I do. I felt a sureness that it was indeed the right course of action to skip the event. The transformation that has been slowly taking place within me over the last 10 months during my dry year became apparent in that moment in the greenhouse. The clarity that has been developed through dealing with decisions without a coping mechanism, has led me to this moment.

Feeling lighter, I made my way to the next row and started noticing hornworn damage on the plants—half-eaten tomatoes, chomped-off leaves, scat. Gosh, I hate those damn varmints! We had seen many of these critters over the course of the summer. They are so ugly that even the guys on the farm have a difficult time disguising their squeamishness upon encountering one. Assessing the situation, I could tell that what I was seeing was older damage, and I convinced myself that I would not see one today. But, I was wrong. There he was…on the big orange cherry variety.

I was startled because this guy was different. He was smaller than the hormworms I’d seen all summer, and his back was loaded with tiny white particles. It looked as if he had stopped by the ice-cream shop and ordered up some white candy sprinkles. Ugg! I immediately pulled out my red Felco snippers and cut the leaf on which he was perched. I took him, leaf and all, outside and stomped on him, crushing him to smithereens. As soon as I got back into the tunnel, I spotted a second. 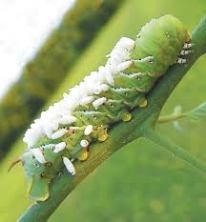 This time I took a moment to examine him a little closer and then, it came to me. The poem! The memory of a Stanley Kunitz poem about the hornworm hit me over the head like a brick. Remembering about a year ago, I was reading a collection of poems by Kunitz while lying in bed. Philip asked me to read him one and I recited Hornworm: Autumn Lamentation. The images in this poem were so confusing to us that we pulled up Google on the iPhone (yes, while lying in bed) and took a look at this thing. We concurred, “Wow, creepy little fella.” I can now verify from first-hand experience that our proclamation one year ago was true.

For a second time that day, I took out my trusty snippers, cut the leaf and took him outside to meet his maker. The thought of this creature stayed with me for the rest of the day. Returning home from work, I was compelled to find the Kunitz poem as soon as possible. Not being the kind of person who looks to the Universe for signs or makes meaning out of trivial happenings, the compulsion to find this work was simply fueled by wanting to know more. This encounter had left me feeling odd, unsettled, and inspired on some level.

I Googled the hormworm so I could find the exact name of the poem and obtain a few more facts. I was reminded from reading the poem and doing a bit of research that the hornworm was being parasitized by a small braconid wasp, Cotesia congregatus. Wasp larvae that hatch from eggs lay on the hornworm’s back and feed on the inside of the hornworm until the wasp is ready to pupate. The cocoons appear as white projections protruding from the hornworm’s body (like little white sprinkles). This is fatal for the hornworm.

The next thing that I learned was that if you find this parasitized hornworn in your garden, you should leave it alone. Once the wasps emerge from their snowy white cocoons, they will find other tomato-devouring hornworms and perform the same process over and over again. Pest control at its finest! (I blew that chance, twice.)

After learning more about the hormworm, the feeling that I had of absolute repulsion all summer for this creature turned on a dime. Sadness and wonder filled the space that once held disgust. A sense of sympathy overcame me as I thought about how diminished and weak he had looked. I was glad that I put the guy out of his misery. What a fate, to be eaten to death slowly. Yet, how perfect nature is. It creates a solution for the farmer by providing this small wasp.

There was one other truly significant piece of information that I was missing in my understanding of the hornworm, and that was brought to my attention with the Kunitz poem and the internet. The most profound moment in this day was realizing that the hornworm is NOT a worm but a caterpillar who is trying to transform into a moth, specifically a Sphinx Moth.  Simply seeing this dreaded creature as a small beast to be stomped out, I failed to see his true nature. This is not to say that next year’s actions will be any different. We need to stop these pests or we will lose our crop. But the next encounter with the hornworm will be different. I will stop and remember that he is not so different from me and that we all struggle and hope for the chance to change. Then I will send him to the “Great Worm in the Sky.” 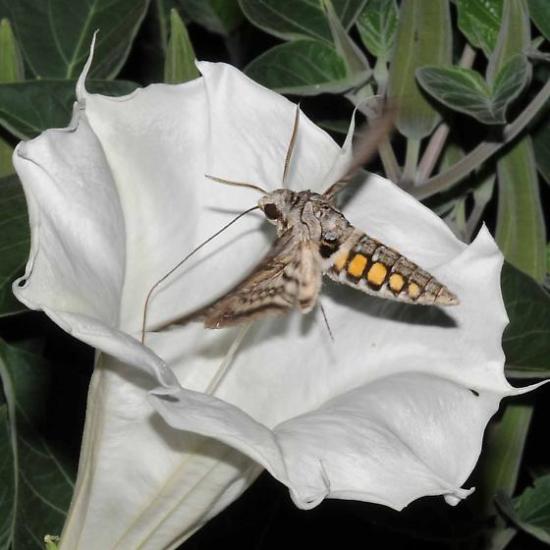